The Nghe An province is rapidly becoming one of the most sought after “off the beaten path” locations in Vietnam. With stunning mountain landscapes, rich biodiversity and some of the best cuisine in Vietnam it is not hard to understand why. But where exactly should you visit in Nghe An? What are the best tours and where can you find them? How can you experience the local culture and when should you visit? Read on to discover more about the dreamy Nghe An province.

The first thing to note about Nghe An is how off the beaten path it really is. Located in between Hanoi and Hoi An it is off the “traditional” tourist route that travelers take when visiting Vietnam.

In Vinh, you will experience the essence of Vietnam. Because of the lack of foreign visitors, prepare for a lot of selfies taken with the friendly and welcoming locals.

Ho Chi Minh Square is very much the centerpiece of the capital Vinh and is where you should start your exploration the city. Here you will find the largest statue of Ho Chi Minh in all of Vietnam, not surprisingly given that it is the hometown of the former leader. 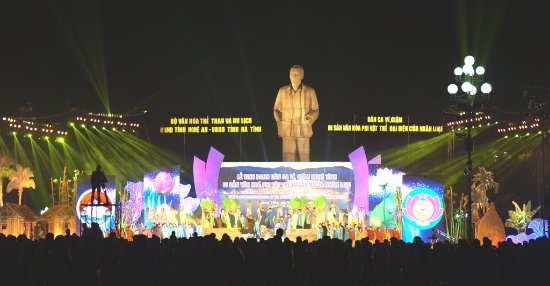 Be warned you cannot walk up the steps of the statue, and this is reserved for those who are laying flowers. In the evenings you’ll find many people here enjoying an evening out. The park often plays host to events, festivals, and concerts.

Vinh has an abundance of shops, cafes, bars and markets to explore. The city still has a slight utilitarian feeling to it than other cities and this is especially present in the markets.

While places like Ben Than Market in Ho Chi Minh City are a must-see, Vinh market feels more authentically Vietnamese. With over 560 vendors, you will find everything from fresh produce to handcrafted local jewelry. Be prepared to haggle as vendors will quote prices, which are often two or three times the market price.

Before you leave the market, be sure to try the famous Bot Coffee or “Whipping Coffe,” a Vinh specialty. It is made from mixing a lot of sugar with black coffee and whipping for a good 3-4 minutes, giving it a unique sugary foam. The stall is tucked away in the back of the market, but once you find it, a genuinely local experience awaits you.

If you’re looking to try some local cuisine, súp lươn or eel soup is a Nghe An specialty. The eel used in the soup is native to the region and caught in the many nearby rivers and lakes. Typically it is eaten for breakfast, so you will find it served by most morning food stall vendors throughout the city.

Cao Restaurant, in the heart of downtown Vinh, is the recommended place to try the very best of Nghe Anh cuisine. Here the tomato features heavily. With its unique menu of local recipes inspired by the nearby ethnic Thai villages, you can sample many dishes you may not have seen elsewhere. The decor alludes to the diversity of the region with its many Thai crafts and pictures.

Vinh’s strategic location has made the city a vital transportation hub throughout Vietnam’s history. The Tay Son Dynasty that ruled Vietnam from 1788 to 1802 considered making Vinh the capital of Vietnam. Although this did not come to fruition, it did lead to considerable construction and development taking place during this time. Under French rule, significant industrialization took place and Vinh became well known for its factories.

Vinh and the surrounding areas have been considered essential centers of rebellion and revolutionary activity. In the 19th and early 20th century, the city was the center of several prominent uprisings against the French. And, several notable revolutionaries have been born here, most notably Ho Chi Minh.

The city of Vinh was once home to several historic sites, most notably an ancient citadel. However, after devastating wars with the French and the Americans, most of the original city was left in ruins. The reconstruction of Vinh borrowed heavily on Soviet ideas about town planning.

A popular destination for domestic tourists and foreign tourists alike is Kim Lien, the birthplace and hometown Ho Chi Minh. The rustic reconstructed cottages are simple but provide an accurate depiction of how people lived in Vietnam over a hundred years ago. The surrounding nature will give you an impression of the inspiration Ho Chi Minh would’ve felt as a young man. The sight also has a shrine to Ho Chi Minh where one can pay their respects. Plenty of historical information detailing his early life and family history is also on display here.

A stay in Vinh would be incomplete without a visit to the splendid Pu Mat National Park. The park is home to a vibrant ecosystem of jungles and biodiversity. The jungles are home to endangered species such as the Indochinese Tiger and Indochinese Elephant. Their protected status in the park helps ensure their survival.

In the park, Khe Kem waterfall is one of the sights to behold. Refreshing yourself in the pool of the waterfall after a hike through the jungle is an unforgettable experience. Listen carefully, and you might hear the spirits said to reside in the water.

Within the park, you will encounter several ethnic minority villages. If you book a two-day tour of Pu Mat you will get the opportunity to spend a night in a homestay in one of these villages.